PLaY is so happy to offer you this fun and interesting day here in the beautiful Catskill Mountains!

Start your day with a wonderful Yoga class at 10am with none other then our beloved @YogaDan. Yoga Dan (Daniel Gottlieb) is a NYC-based Detroit transplant specializing in Sports / Performance / Recovery Programming. NPI-Certified Posture Specialist (NPI-CPSTM) With 20+ years’ experience, YD started his athletic career playing college basketball. Due to a severe back injury his basketball career was cut short. Frustrated with the lack of progress using conventional methods YD discovered yoga and healed himself back to recovery and full strength. It is through this experience that he honed his knowledge of bio-mechanics. Today he’s developed a practice that brings together his passions for sports and yoga to create a wholistic approach to wellness with a focus on injury prevention and rehabilitation.

Then we’ll break feeling restored and renewed and share a meal and stories with like minded friends.

After lunch , we follow the inimitable Moe Lemire for a fascinating snowshoe through his beloved catskill mountains.

In 2016 Moe thru-hiked the Appalachian Trail from Georgia to Maine. On his thru-hike of the entire trail, he spent 179 days traversing a total of 2189 miles. He has also hiked the 358 mile Long Path, the 170 mile Cohos Trail, and the 138 mile Northville Placid Trail.

Moe is a Catskill 3500 Club member, having climbed all 35 peaks in the Catskills above 3,500 feet, both in the summer and in the winter. He is currently working on his Catskill Park All Trails Patch and the Catskills Grid.

Moe is the New York State Advocate for the Leave No Trace Center for Outdoor Ethics. His goal in this role is to spread knowledge about the seven Leave No Trace principles in New York.

Learn the ins and outs of snow showing, the catskill mountains, and the wildlife that makes its home here.

Expect the day to end by 4 PM

Learn More about Moe Lemire and Hikes on Guides! 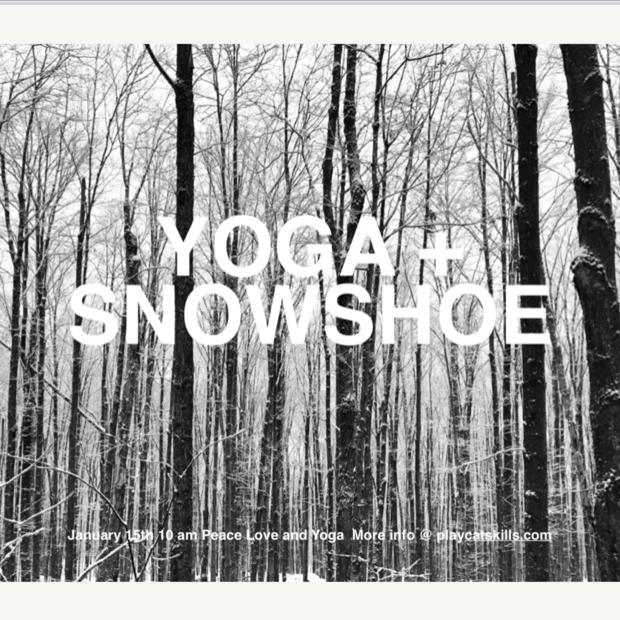 Join us for a special afternoon with Yogi Rob Greenberg. We’ll practice a short asana with meditation followed by story telling and a brief  question and answer period .

Learn about the man behind the legend!

Tickets available through eventbrite and are limited due to space constraints.

The National Women’s Soccer League is brought sports back, and it brought CBD with them.

This year ,the NWSL announced it had finalized plans to begin competition on June 27, putting it on pace to be America’s first top-flight league back in action. The league’s nine teams gathered in Utah and played a monthlong tournament, without fans in attendance, rather than their traditional season. The facilities the teams shared belonged to Utah Royals FC, which earlier this year entered into a sponsorship agreement with Mendi, a CBD company based out of Portland.

Mendi’s connection to women’s soccer runs a lot deeper than that, though. One of the company’s founders is Rachael Rapinoe, whose twin sister Megan finds time to be involved in the business when she’s not doing things like leading the United States to World Cup wins or raking in various “of the year” honors.

The company also sponsors the North Carolina Courage, the two-time defending NWSL champions. But the Portland-based CBD company doesn’t sponsor Portland’s team, the Thorns. They’re sponsored by a different Portland-based CBD company, Social CBD. You’ll see that brand’s name across the chest of the team’s warm-up gear during practices, before games and all over social media.

Leagues across America have been slowly opening up to CBD, and cannabis in general, but it’s the NWSL that is leading the way.

Sports should be an obvious fit for CBD, and not just as a marketing tool. CBD’s pain and inflammation relieving qualities make it a great tool for athletes who are recovering from injury or warding off post-workout soreness. They also make great partners in the push to normalize cannabis.

In April, the Courage held a giveaway on social media. Along with usual prizes like an autographed jersey and tickets to a game, the lucky winner also took home a haul of CBD. Yep, professional sports teams are now comfortable handing out cannabis products. Then there’s the Thorns, who, before coronavirus, were planning to trot onto the pitch in front of their 20,000-plus fans, while happily wearing a CBD brand on their clothes.

Those fans won’t be in the stadium any time soon, but when the NWSL returns to the airwaves, plenty of people will be seeing CBD in a space they never have before. ♦

The original print version of this article was headlined “Cannabidiol FC”